Yogi Bhajan is my spiritual guide.  As a poet and lover of the Word, he always humbled himself before Guru Nanak and the majestic Siri Guru Granth.  The fact is that Yogi Bhajan brought me here where I am today.  From a barefoot follower of Socrates, he inspired me to live to the elevated melody of the Word.  From a dark anarchist, he showed me the shining way of the saint-soldier, for which I shall forever be grateful.

Yogi Bhajan began to teach in the West in the fall of 1968 and continued his mission around the world until his passing in 2004.  Like Guru Nanak, he was a great empowerer of women and men alike.  In his first few years of teaching, Yogi Bhajan set out the basic values, the foundation of his mission.  This is why I find his early talks so valuable.

Below is a link to his April 13, 1969 talk where he introduces Guru Nanak as the teacher and exemplar of a new way of living, what he called "the Aquarian Age."
Guru Nanak - Man of Peace: Prologue and Audio File
Here is the downloadable transcript of Yogi Bhajan's talk.

Download File
Below is a link to his December 25, 1969 talk where he proclaims the birth of a Spiritual Nation.
A Spiritual Nation is Born: Prologue and Audio file
Here is the downloadable transcript of Yogi Bhajan's talk. 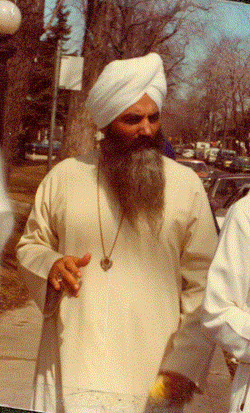 Yogi Bhajan in Toronto circa 1978
In early 1972, Yogi Bhajan set out to give a course for his students setting out as teachers of Kundalini Yoga.  The course was held in Santa Cruz, California from January 29 to February 4, seven days packed with the fundamentals of Kundalini Yoga teachings taught directly by the Master.

Many years later, finding an old typewritten manuscript of the course, I assembled a group of eager lovers of Kundalini Yoga to put these teachings into a digital format so everyone the world over could benefit.  Forty years after the original course, the transcript was finally published for all to study and be empowered.

You may download the file of the Santa Cruz teachers' course here.

YOGI BHAJAN: His Story and My Story

It was 1983 and Yogi Bhajan was on one of his twice yearly visits to his student community in Toronto.  Frankly, I don't remember a great deal excepting his tough feet that seemed impervious to my efforts to massage them and that he gave me a job to do: to write his life story.  The title he gave was "Messenger from the Guru's House."

I was busy in those days starting a business, then raising a wonderful son Yogiji named "Himmat Singh," then moving here and there as our community fell on hard times.  Eleven years later, I received a fax from Yogiji demanding a progress report.  Separated now from my wife and with the business in decline, I was able to piece together a story beginning with his birth and ending sometime around 1995, when I submitted the manuscript to the Kundalini Research Institute for the required approval.  While I waited, I also put together and submitted a book on Yogiji's number one teaching, early morning yoga and meditation.  Then I went to India and I waited some more.

Six months later, when I returned from India and called KRI for a progress update, I found that I had a new editor with no idea about the biography I had submitted.  The sadhana book, for its part, had been lost without a trace.  After updating my new editor about the work, I remained in touch with her, phoning every couple of months to see what progress had been made.  Apparently three undisclosed individuals were independently going through the manuscript to give it their appraisal.  There was never any progress.  My editor made nice chitchat on the phone every time I called.  That was about it.  Then I stopped calling for a year.

In the meantime, I was not idle.  While in India, I researched a subject that had been of great fascination to me:  if the origins of the Sikh tradition as Yogiji had depicted it were so inspired, what happened to the Sikhs in Punjab after their defeat by the British and subsequent colonization?  This was my first little book, which I sent to Yogiji for his review.  Apparently he quite enjoyed it.  Then, still waiting, I wrote a Punjabi primer because I knew Yogiji was keen that we Westerners should take up Punjabi.  I sent that for, and received, the Bhai Sahiba's (Yogiji's wife) approval.  At a summer solstice celebration in New Mexico, I heard a member of Yogiji's staff read some of the biography I had written at his behest to the gathered throng of thousands.  It was encouraging.

After that, I set out to write a serious study of the relationship between the teachings of Sikh tradition and the practice of the yogis, an area over which I knew Yogi Bhajan to be a unique authority.  And another book, a massive volume which basically served as an introduction to Sikh tradition and the life and teachings of Yogi Bhajan.  For these two works, I resumed my connection with KRI.  No surprise, I had another editor and this editor also had no idea about the biography I had submitted several years before.  But this one was very helpful in steering these two more recent efforts to KRI approval.

Books were published, bought and sold.  After my return from India and years of utter immersion in researching and writing books, I returned to teaching classes.  Then, in 2004, Yogi Bhajan the great Siri Singh Sahib passed, but life went on at KRI and elsewhere.

The next time I checked in with KRI about the biography, there was yet another editor for me and she also had no knowledge of what I had written and submitted twelve years before.  She referred me to the head of KRI who told me that without detailed referencing the biography would not be approved.

While he was alive, Yogiji had been my sole authority and referencing.  After all that work and waiting, what to do now?  I also could not help asking myself whether KRI was utterly incompetent or whether perhaps Yogiji had meant all along for this to be an ordeal for me.  Where was I now - without approval for publication or even a publisher?

After some meditation and a call to a friend in New Mexico for some perspective, on the holy day of Baisakhi (April) 2008 I began to send out monthly chapters of Messenger from the Guru's House to an email list of hundreds.  The response from around the world was overwhelmingly happy and grateful.  I continued to send those chapters out each month until January 2010, then resumed again restarting at chapter one in November 2011.

So far, I am pretty certain of the story up to 1971.  Up to that point, the story is 80-100% based on Yogiji's own account.  After that, there are so many carriers of the story, many still living, that I have been hesitant to proclaim what little I know as Yogiji's "official" story.  Hopefully, as new narrative threads from Hari Singh and Hari Jiwan Singh and Siri Ved Kaur and others come out, I will feel I can do justice to the closing chapters of Yogiji's story one day soon.

To be invited to join the Messenger from the Guru's House Google Group and receive monthly installments, you may email me at:  gurufathasingh@gmail.com.

In the fall of 2011 I was scheduled to speak at conference of Sikh women about Yogi Bhajan's empowering and deeply healing teachings for women, a topic I had taught and was quite knowledgeable about.  The problem was, most of these women did not know about Yogiji and I knew it was not going to be very convincing for me, a man, to tell all these women about the greatness of Yogiji's teachings for their gender.  A solution came to mind:  I needed a broadly based survey of women and men who have practiced Yogi Bhajan's teachings to tell the story for me.

So it was that with some expert help from my friend and colleague, Dr. Farah Jindani, an historical first survey of Yogiji's students went out.  The results from 260 participants around the globe were very interesting.  Some were just - and I am especially grateful to Dr. Jindani for these because she suggested I ask people to put their experience into words - inspiring.

To see a synopsis of the survey's findings, please click here.

As winter descended on us here in Canada that same year, some of us became aware of a disturbing trend in the Kundalini Yoga teaching administration based in the US.  A couple of years earlier, one very senior member of the KRI teaching hierarchy had proclaimed at a "level 2" teacher training in Toronto that one day there would be many more levels, levels 3, 4, 5, 6, and so on.

Some of us smelled the scent of profiteering, which was perhaps no accident.  There was at that time a legal fight going on in US courts over the corporate assets Yogiji had built up while he lived.  Clearly some yogis were now only in it for the money.

When KRI began to advertise a first "level three" course, I once again called on Dr. Jindani for her survey skill and welcomed Hari Singh (Florida) and Shabad Singh (Amritsar) on board to solicit grassroots input from teachers worldwide about what a level three course, should there even be such a course, should look like.  It was the best way we could think of to challenge the thinking behind the level three initiative without directly opposing it.

For more details about this survey, please click here.

The responses offered a number of inspiring alternatives to the proposed courses offered by KRI.  Several objected to a perception of an increasingly commercial orientation to the "marketing" of the teachings.  Thankfully in the time since the survey, there have been a number of positive developments.  1) The lawsuit has been settled, 2) a new board has been elected to manage the corporations including KRI, and 3) KRI has announced that its original level three courses were only part of a planned level three program.  After a few of these courses, no level 3B or 3C courses have been held.