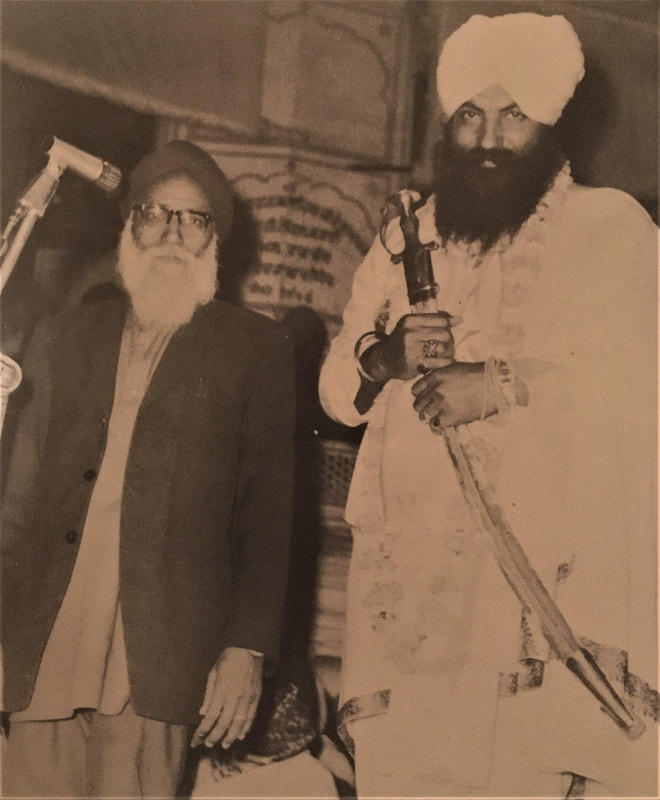 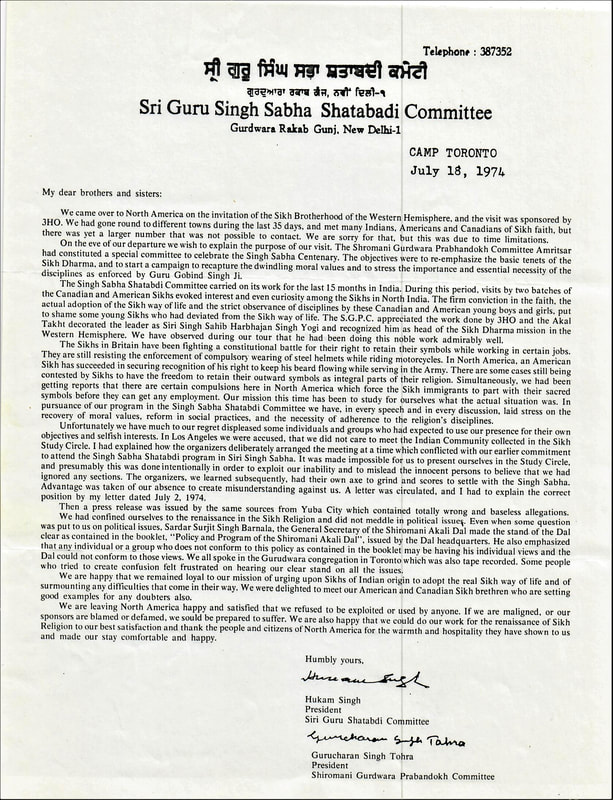 During the historic tour of Sikh communities in the United States, Canada, England, Holland
and France hosted by Siri Singh Sahib, Siri Guru Shatabdi Committee President Hukam Singh
and SGPC President Gurcharan Singh Tohra issue the above communique, mentioning
"the S.G.P.C. appreciated the work done by 3HO and the Akal Takhat decorated
the leader as Siri Singh Sahib Harbhajan Singh Khalsa Yogi and recognized him as
the head of the Sikh Dharma mission in the Western Hemisphere." 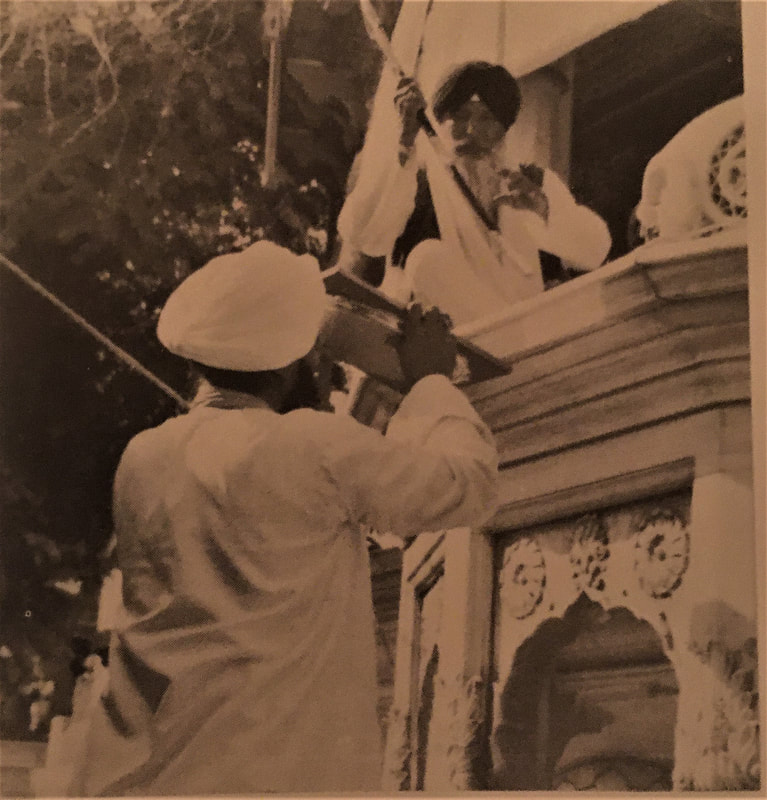 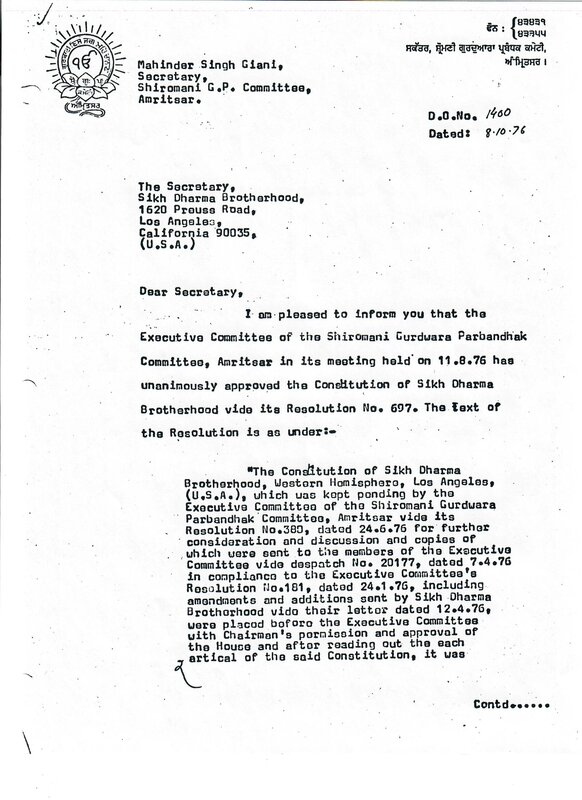 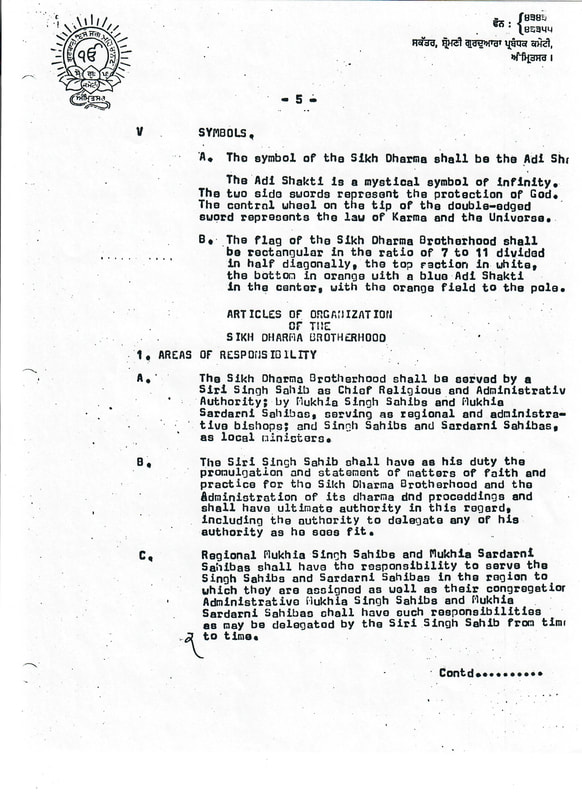 On October 8, 1976, the SGPC, the foremost religious body of Sikh dharma approves
the constitution of Sikh Dharma Brotherhood (subsequently renamed "Sikh Dharma")
based in the United States, with the Siri Singh Sahib as chief office holder. 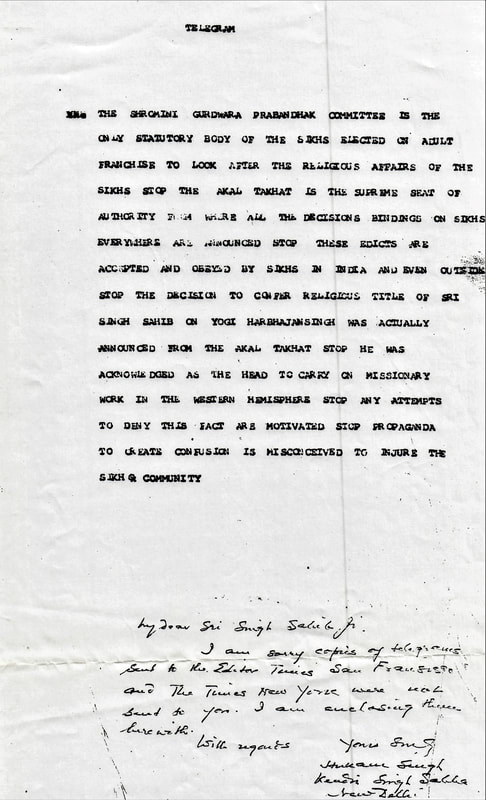 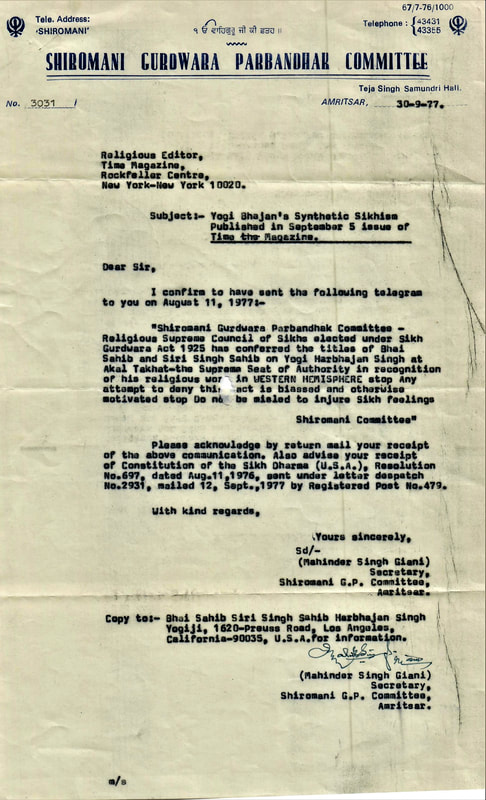 In response to a libelous article in Time magazine that called into question the title of Siri Singh Sahib,
S.G.P.C. Secretary Mahinder Singh Giani and Sardar Hukam Singh address the editor of the publication
with a telegram and official letter. 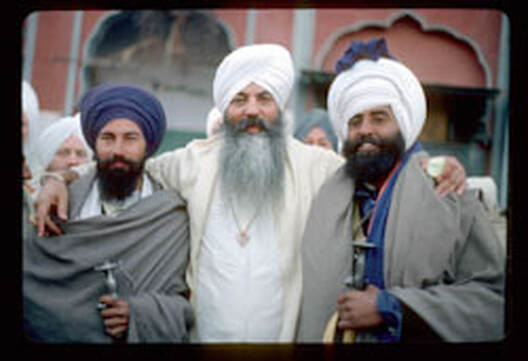 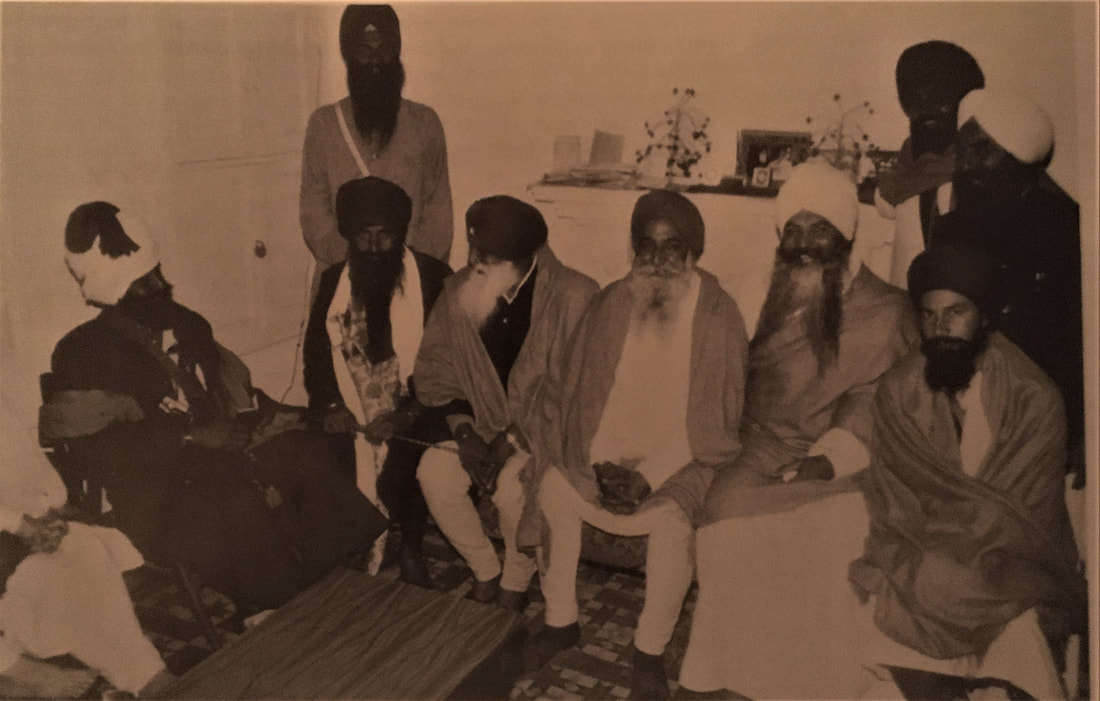 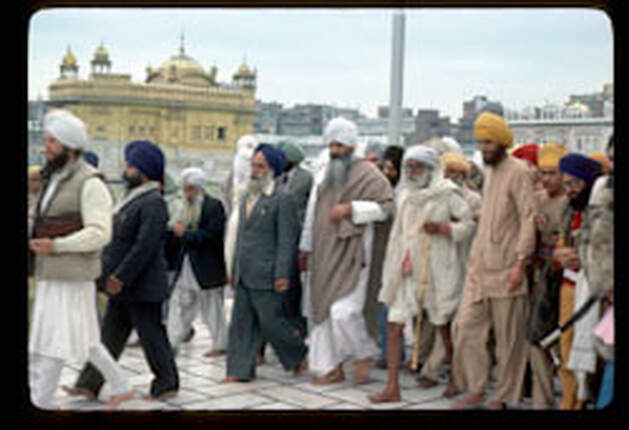 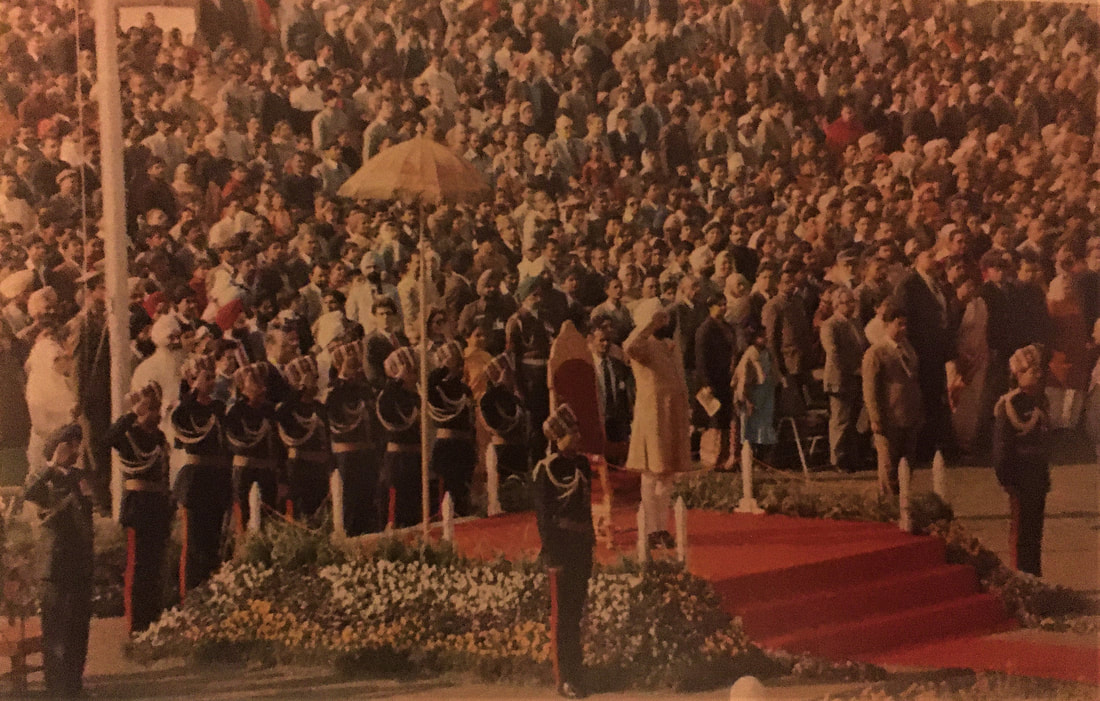 Siri Singh Sahib at the Republic Day parade in New Delhi, January 1984.  He continues his efforts for peace even as the situation deteriorates.  (Photo: Unknown, Beads of Truth) 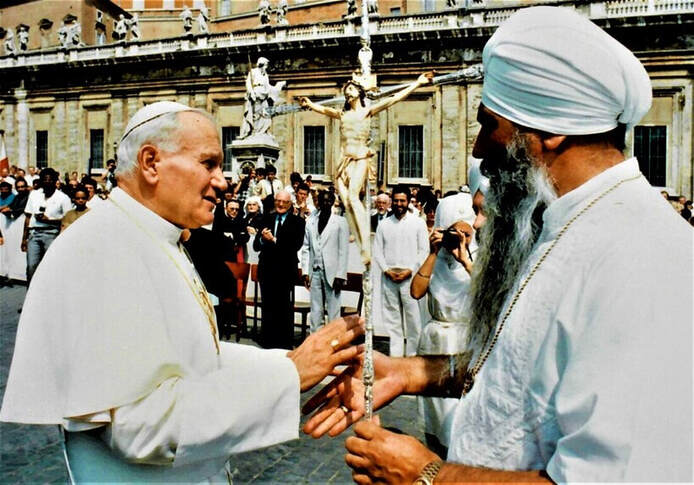 Siri Singh Sahib offers thanks and a silver crucifix as a gift to Pope John Paul II for raising the world's awareness of the killing of innocent pilgrims at the Golden Temple by the Indian Army in June.
He and Pope John Paul II had formed an instant bond when they first met in 1983.
(Photo: Unknown, Sacred Collection) 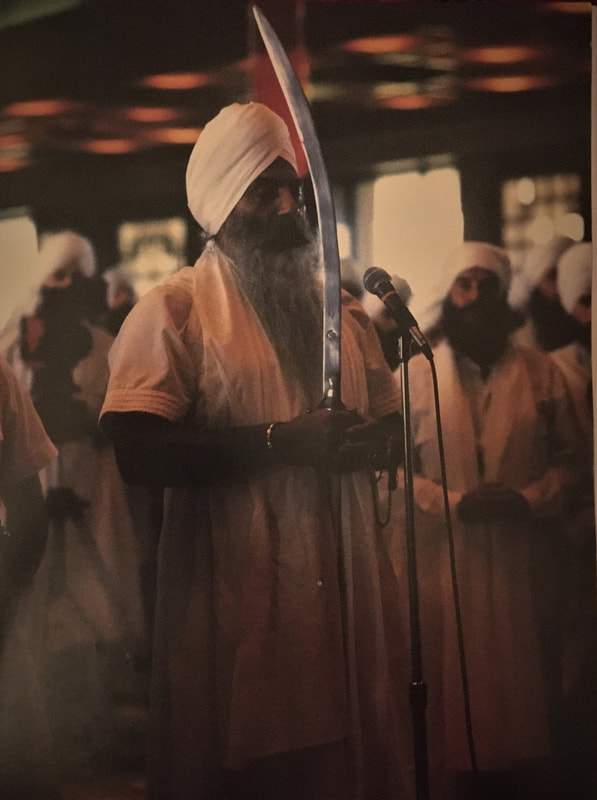 Siri Singh Sahib leading a prayer with a "Siri Sahib" or sword in his hands.  After the
Golden Temple attack and imposition of martial law in Punjab, the Siri Singh Sahib makes efforts to bring aid and support to the suffering.  (Photo: Soorya Kaur Khalsa,
The History of Sikh Dharma in the Western Hemisphere) 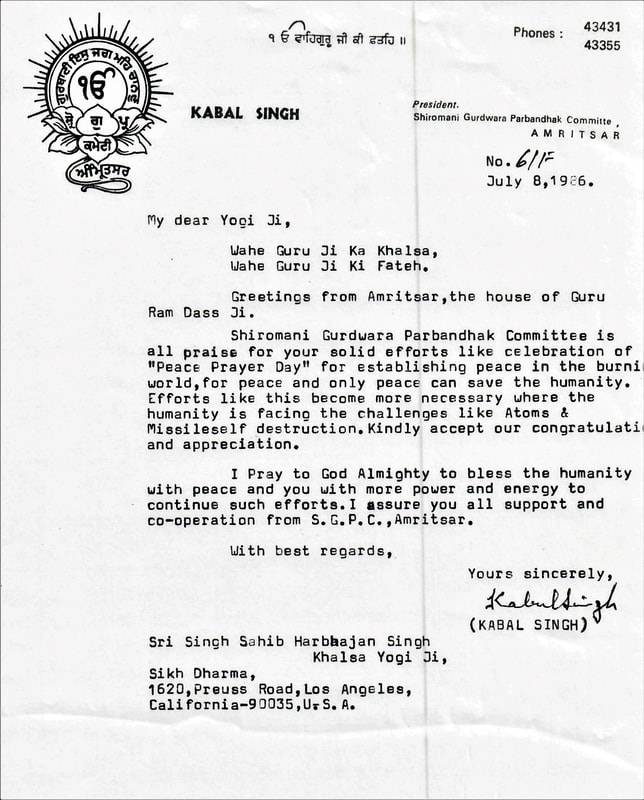 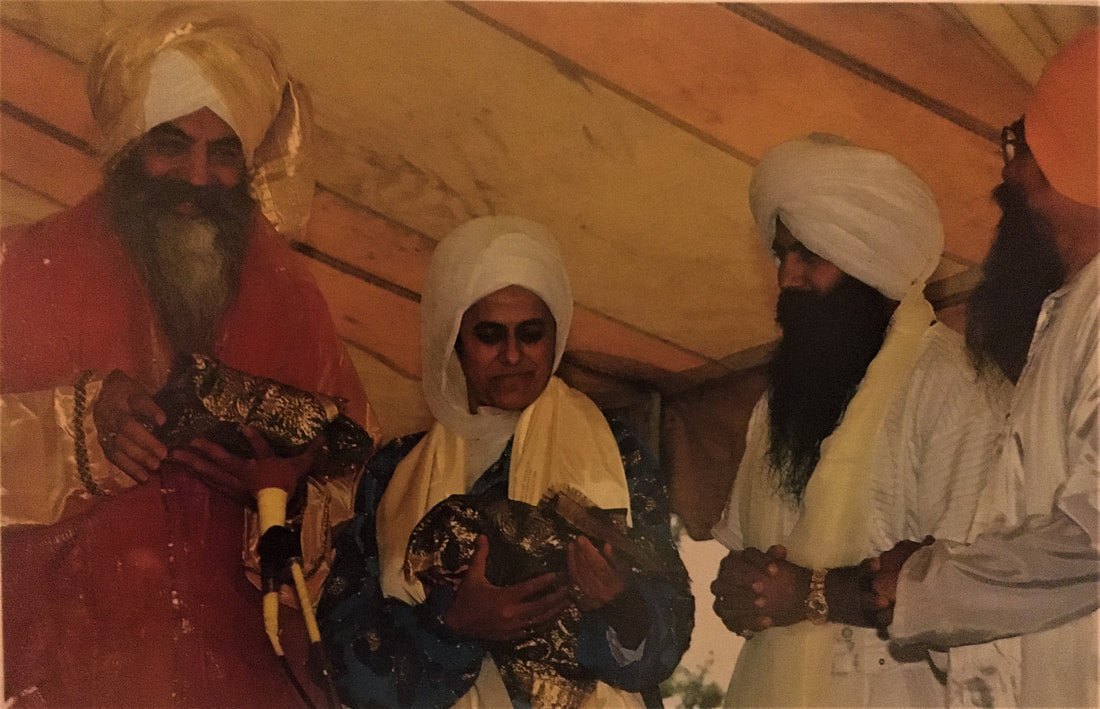 From 1984 to 1993, travel to Punjab is prohibited, but Baba Joginder Singh Moni, Jathedar of
Takhat Siri Hazoor Sahib from 1956 to 1984, is able to travel abroad and pay his respects.
(Photo: Sat Simran Kaur Khalsa, The History of Sikh Dharma of the Western Hemisphere) 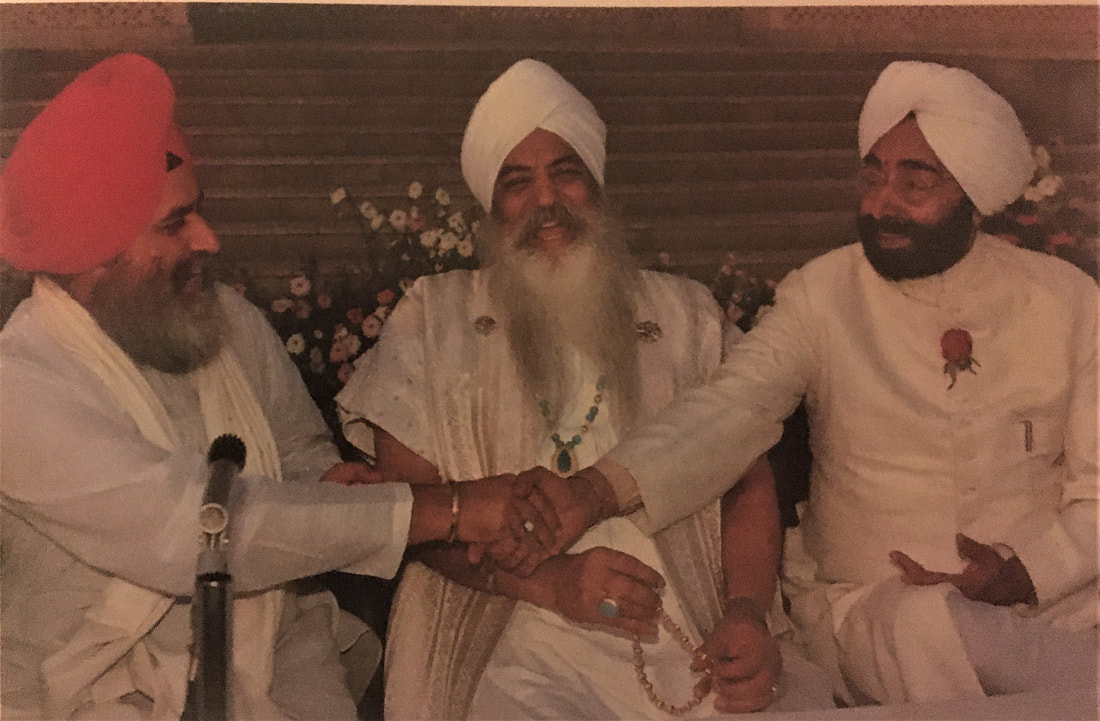 Siri Singh Sahib, always building bridges, sits between former Indian President Giani Zail Singh (right) and M.P. Surenderjeet Singh Ahluwalia.   Siri Singh Sahib considered Zail Singh innocent of the former Prime Minister's vicious designs against the Sikhs of Punjab.  At the time of the Golden Temple attack, many said Zail Singh should resign, but Siri Singh Sahib cautioned that should he resign, all Sikhs would be targeted as anti-national and a bloodbath of even greater proportions would commence.    (Photo: Soorya Kaur Khalsa, The History of Sikh Dharma of the Western Hemisphere) 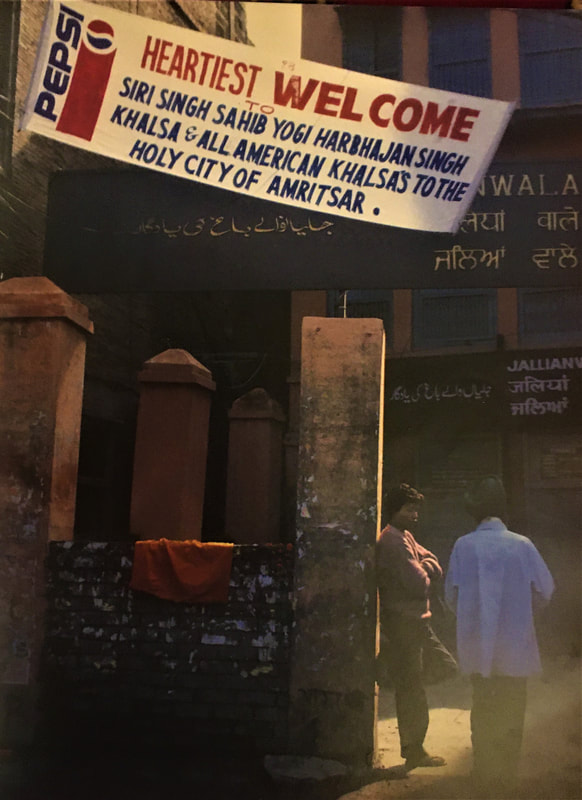 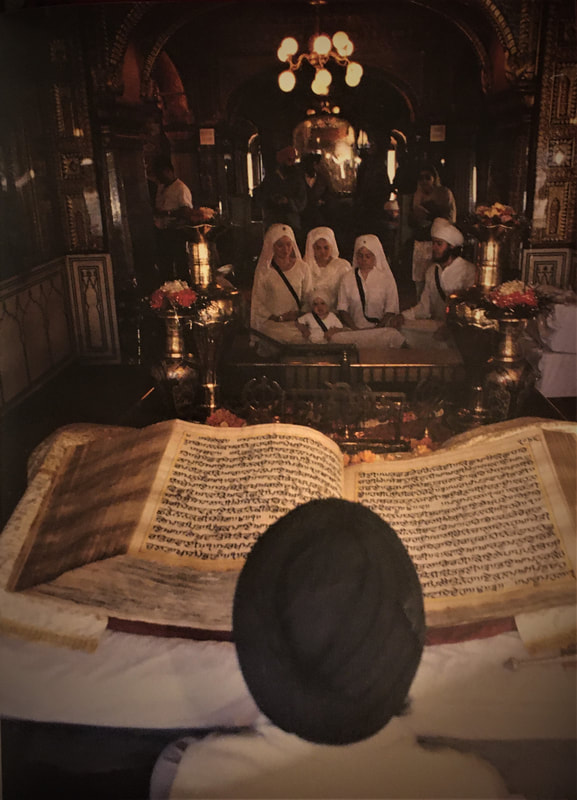 Two generations of Western-born Sikhs take advantage of the re-opening of Punjab
to pay their respects at the Golden Temple.  (Photo: Soorya Kaur Khalsa,
The History of Sikh Dharma of the Western Hemisphere) 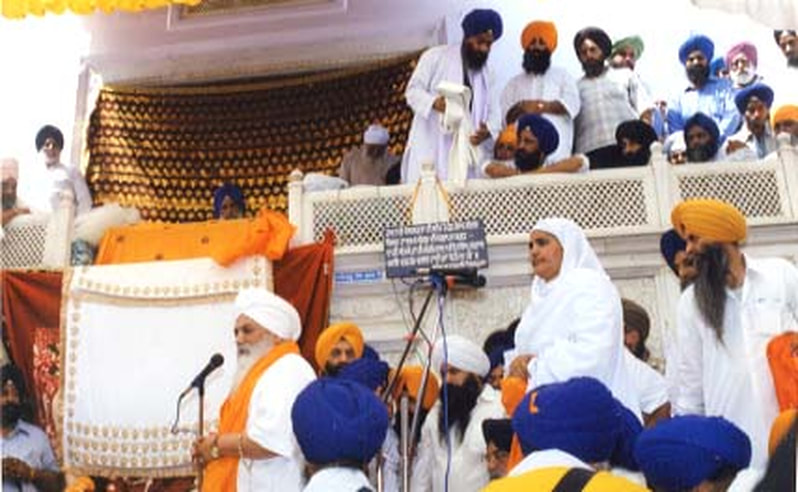 At the 300th anniversary of Khalsa, celebrated by hundreds of thousands in Anandpur Sahib in 1999,
Siri Singh Sahib is given another, and final, title in recognition of his lifelong dedication and service:
"Panth Rattan" - Jewel of the Nation.  Here, he is pictured with SGPC President Bibi Jagir Kaur.
(Photo: Gurumustuk Singh Khalsa, Sikhnet) 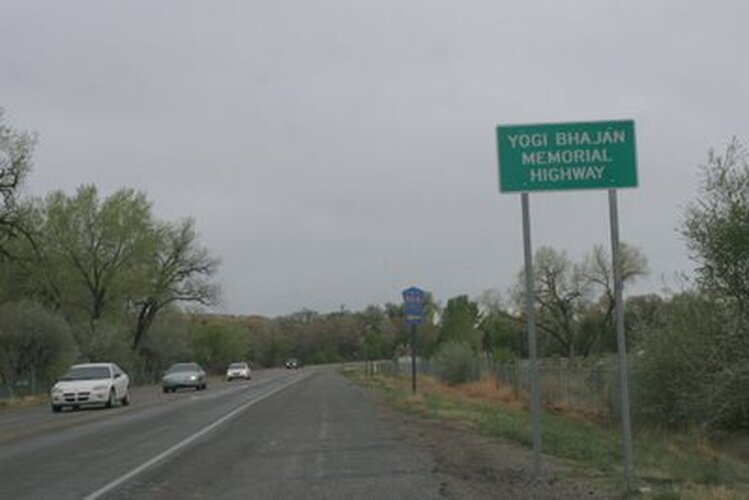 The passing of Siri Singh Sahib Bhai Sahib Harbhajan Singh Khalsa Yogiji, Panth Rattan is felt around the world.  In Amritsar, the SGPC President Bibi Jagir Kaur officially expresses her condolences and SGPC offices are closed for a day.  In New Mexico, flags fly at half mast.  Plans are launched to name a roadway the
"Yogi Bhajan Memorial Highway."  In the following months, a resolution "Honoring the life and
contributions of Yogi Bhajan, a leader of Sikhs, and expressing condolences to the Sikh community on his passing" passes both U.S. Houses of Congress by unanimous votes, placing Siri Singh Sahib
in the rare company of Martin Luther King Jr, Mother Theresa and Pope John Paul II.

The inspiration and teachings of Siri Singh Sahib live on in his international mission, in his many contributions to human wellness and peaceful co-existence, in the increased recognition of Sikh dharma as a world religion, in his enterprises such as Sikhnet, the Kundalini Research Institute, Yogi Tea Incorporated,
and Miri Piri Academy, in the communities her helped found, and in the hearts of the many thousands
he has brought to a healthier, happier, holier way of life.  (Image: Gurumustuk Singh Khalsa, Sikhnet)