The stigmatization of women in religious settings is a well-known characteristic of modern life.  Guru Nanak said, "Why should we call her 'bad' from whom are born kings?"  Does anyone listen?  Does anyone hear?

According to Saint Paul, women are to keep silent during worship services.  In mosques, women are typically made to sit behind a barrier or in a room separate from where the prayers and sermon are held.  Until recently, women have not been allowed to enter certain Hindu temples.  This is the background of the following story.

In 1980, a group of about twenty-five American Sikhs, students of the Siri Singh Sahib, set out on a pilgrimage to India.  They spend most of their time sharing inspirations with Baba Nihal Singh and his community of blue-clad saint-warriors at Harianvela and other villages of rural Punjab.

At some point in their stay, Guru Terath Singh, who is the group coordinator and works as a lawyer in the United States, speaks through an interpreter with Baba Nihal Singh.   Guru Terath Singh tells Babaji that he feels it is time women were allowed to sing in Harimandir Sahib.  In reply, Baba Nihal Singh gives an approving look, but says nothing.

Afterwards, Guru Terath Singh speaks with Krishna Kaur, who is a gifted singer in her own right, and asks her about singing at the Harimander Sahib.  She is not convinced.

Vikram Singh is scheduled to lead the group in singing Gurbani Keertan at the little sanctuary on the roof of Harimander Sahib for the Bhog of an Akhand Paath for the Siri Singh Sahib on Guru Ram Das’s birthday .  This will be his second historic appearance, as he had performed in the main room downstairs at the Golden Temple the year previous.

When the day comes, everyone makes their way by bus from Harianvela to Amritsar, home base for Sikhs everywhere.  The twenty-five respectfully bow, cross the footbridge, and make their way to the Gurdwara up top of the holy Harimander.  As it comes their turn, they squeeze in behind the microphone, with Vikram Singh in front, Shakati Singh on one side to play tabla, and Guru Terath Singh on the other. 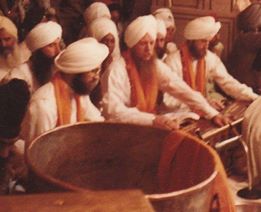 A meek SGPC man sits behind the Guru Granth Sahib, doing the Chor Sahib duties.  The open space on the roof of the Golden Temple is filled with Sangat.  Everything is set.  Vikram, with his booming voice, starts the program and everyone joyfully sings along.

After an hour or so, Vikram Singh has finished his planned set of Guru Ram Das Shabads.  Winding down, he looks over at Guru Terath Singh.  Guru Terath eyes Krishna Kaur, hoping to coax her to the mike.  She demures.

Guru Terath Singh eyes her again, imploring her.  “This is history,” he seems to say.  At last, reluctantly, humbly, but in full possession of the moment and the possibility it presents, Krishna Kaur rises to take her turn at the microphone.

As she does so, the SGPC man stirs.  He looks over at Krishna Kaur.  “You know the rules,” he seems to be saying, then stands up, as though to approach and put an end to the program.

"Should she or shouldn't she?" the question hangs in the air for what seems like a few hundred thousand years.

In the end, Baba Nihal Singh responds, "Of course!" with a clear nod to Krishna Kaur in response to Guru Terath Singh's question, as if to say, "Why not?  She's Khalsa!"

The SGPC man slowly sinks back into his place.

Guru Terath Singh was touched.  Baba Nihal Singh was moved.  Everyone in that place was carried by the vivid inspiration of that moment in time.

Krishna Kaur sang the Song of beloved Guru Ram Das, as an outlaw, a renegade in that palace of conformity, as a woman in a temple of patriarchy.  As a foreigner, as an outcaste, she outshone all their prejudices as only a graceful woman, as a Draupadi who knows her God-given power can. 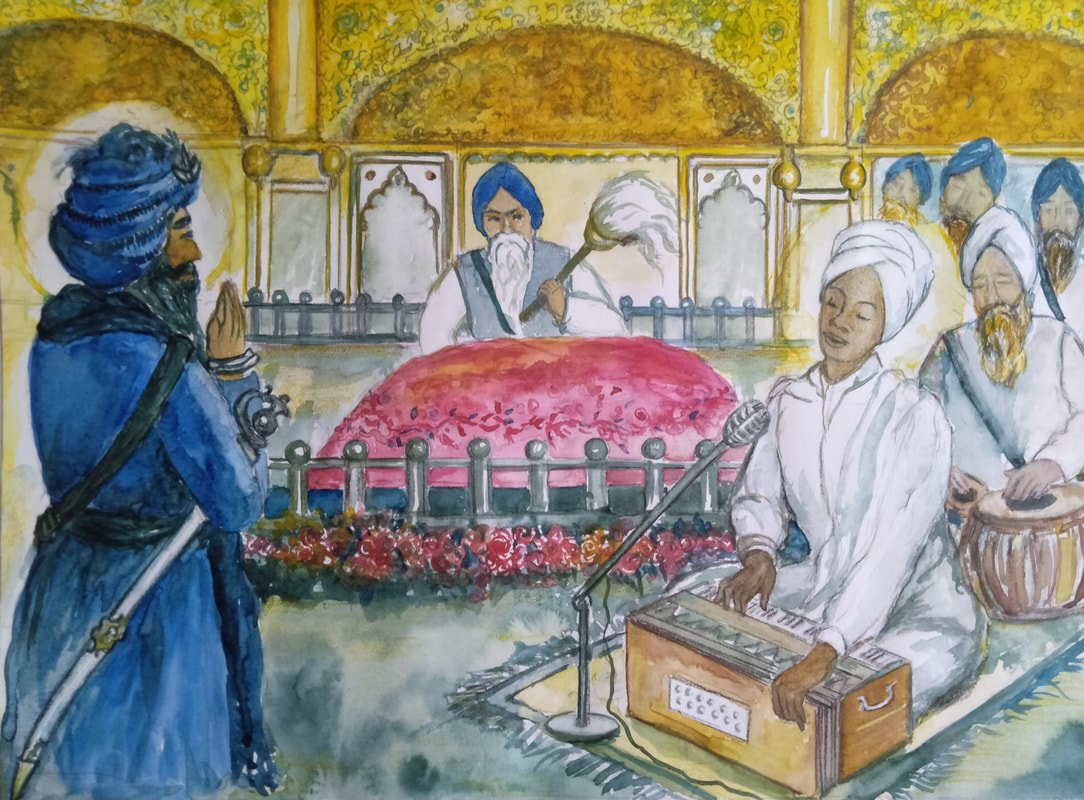 Thanks to Krishna Kaur, Guru Terath Singh and Vikram Singh, for sharing their recollections.  Thanks to artist Leena Varghese for her rendering of that timeless day and to Vikram Singh for his historic photo of the event.  Moreover, thanks to Baba Nihal Singh ji and to Guru Ram Das ji for making everything possible.