The Sikhs of Punjab were twice beaten by the British in two desperate wars (1845-46 and 1848-49).  This is the story of the uneasy peace that followed, the efforts of the rulers to keep their subjects obedient and loyal, and the efforts of remarkable Sikhs to regain their freedom.  It is the story I researched and wrote during my 6-month stay in Punjab in 1995-96.  This updated edition includes new research, historic photos and paintings, and links to valuable online resources. 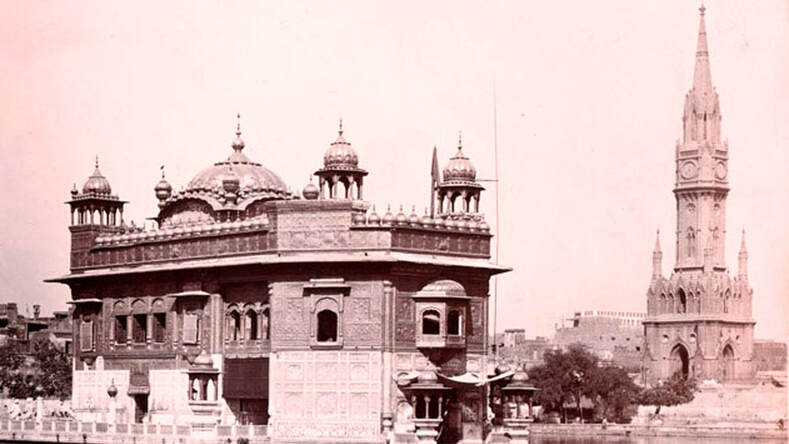 The Gothic Cathedral-style clock tower seen behind to the right of the golden sanctum and pool was started by the colonial rulers in 1862 and completed in 1874, despite opposition from the Sikh community. Built on the grounds of the maharaja’s three-story palace which the British had briefly repurposed as a missionary school, then a police station, jail and court house, and then demolished, it was a deliberate afront to local sensibilities. Towering above the Akal Takhat and every other landmark at 145 feet, its Gothic design was purely European in inspiration. Moreover, it brandished that quintessential Western invention, a clock with an illuminated dial to inspire a mechanized sense of timeliness and order across its domain. It was demolished in the closing months of 1945 to allow for an expansion of the perikarma of Harimandir Sahib. In 1947, the SGPC management saw fit to build its own clock house at an entrance to the Golden Temple complex.

Praise for Badges of Bondage:

“Thoughtful people everywhere will be touched by Guru Fatha Singh’s concern, as also benefit from a reading of his first book.  His first set of documented writing, succinct and neatly produced, explore the Sikh faith through history.  His loyalty to the Guru’s purpose is firm as a rock.  His understanding of Gurbani is extraordinarily perceptive, and their rendering into English sensitively poetic.  His objective in compiling the historic panorama is to re-awaken the true spirit of the Khalsa.”
- Sardar Saran Singh, editor, The Sikh Review, Kolkata

“Your essay makes very cogent reading and I enjoyed going through it.  Your narration is powerful and effective.”
- Professor Harbans Singh, The Encyclopedia of Sikhism,
Punjabi University, Patiala

“The author rightly laments the surrender of the rich spiritual heritage of Sikhism to the so-called secular, materialistic and dehumanizing values of the West planted during British rule.”
- Sardar Gurcharan Singh, Abstracts of Sikhism, Chandigarh

“I am writing on behalf of the Siri Singh Sahib.  The Siri Singh Sahib really enjoyed reading your book and was appreciative of the work that you have put in.  You seem to have done considerable research which is well-documented.  I also found your writing style comfortable to read, and it held my interest throughout.  I felt your approach is sound, for while it does not actually point fingers and place blame, it makes clear that Sikhs themselves are accountable and responsible for their circumstances.”
- Singh Sahib Gurutej Singh Khalsa, Founder, Akal Security 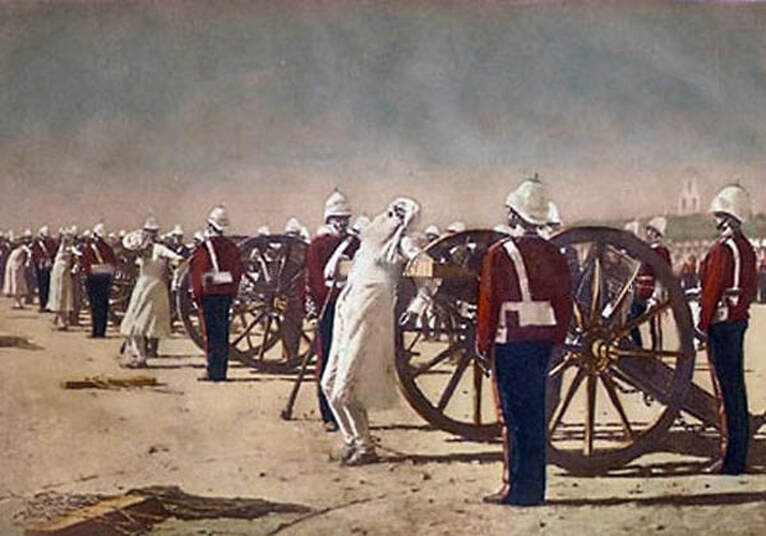 “Suppression of the Indian Revolt by the English,” painting by Vasily Vereshchagin, c 1884. The picture depicts an incident where 65 Namdhari Sikhs were executed by the military by being blown from guns on 15 Jan 1872 in Malerkotla, Panjab. “The prisoner is generally tied to a gun with the upper part of the small of his back resting against the muzzle. When the gun is fired, his head is seen to go straight up into the air some forty or fifty feet; the arms fly off right and left, high up in the air, and fall at, perhaps, a hundred yards distance; the legs drop to the ground beneath the muzzle of the gun; and the body is literally blown away altogether, not a vestige being seen.”

Singh Sahib Guru Fatha Singh Khalsa is a teacher, writer, social activist and agent of change.  He embarked on the path of Gursikh Yoga in Toronto, Canada in 1972 at the age of 18.  In the late 1970s, he launched two important human rights cases, one that allowed turbaned and bearded Sikhs to serve in the Canadian Armed Forces, another that permitted bearded Sikhs, Muslims and Jews to serve in the transportation industry in Ontario.  He has taught Kundalini Yoga as taught by Yogi Bhajan for most of his life in Canada, the United States, Germany and Ecuador.

Guru Fatha Singh’s articles have been published by The Globe and Mail, The Sikh Review, Vitality Magazine and Sikhnet.com.  His serious writing began in 1996 with the self-publication of Badges of Bondage.  Other books in the works for publication with Kindle/Amazon Books include:  The Punjabi I Know: A Punjabi Primer,  The Essential Gursikh Yogi: The Yoga and Yogis in the Past, Present and Future of Sikh Dharma,  Five Paragons of Peace: Magic and Magnificence in the Guru’s Way,  Women of Grace and Power: Stories for Women and Girls of All Ages, and Messenger from the Guru’s House: The Life and Legacy of Siri Singh Sahib Harbhajan Singh Khalsa Yogiji “Yogi Bhajan.”

With Farah Jindani, PhD, Guru Fatha Singh is the co-author of two published academic papers: “A Journey to Embodied Healing: Yoga as a Treatment for Post-Traumatic Stress Disorder” (2015) and “A Yoga Intervention Program for Patients Suffering from Symptoms of Posttraumatic Stress Disorder: A Qualitative Descriptive Study” (2015).

Header photo:
Men of the Regiment of Ludhiana Sikhs deployed to fight for the British in the Second Opium War in China in 1860