I wrote The Guru's Service in September 1995 in the holy city of Amritsar.  There was a world gathering of pilgrims and scholars on that occasion.  Perhaps 100,000 had arrived from near and far.  I admired those especially who had come from distant parts of India because I knew that, in most cases, their trip must have been considerably more difficult than my own on a sleek jumbo plane from the West.

The Sikhs of Amritsar were very much hoping the world conference would make a change in their tenuous and sometimes dangerous relationship with the New Delhi government.  For twelve years now, having been in the forefront of the struggle for Indian independence (1847-1947), after being in the forefront resisting Prime Minister Indira Gandhi's regime of martial law (1975-77), Sikhs the world over had been ostracized by a very effective campaign of words, images and bullets.  They had been labelled "terrorists" in the world press.  Sikh young men had been hunted in the fields and streets of Punjab.  Thousands had been gruesomely tortured.

Outside media had been banned from India since 1984.  Amnesty International was not allowed to witness the government's campaign of atrocities.  Though many Sikhs from abroad had not been permitted to come, the very fact that the World Sikh Conference had been allowed to go ahead was considered an important step along the path to justice and a return to peace.

What was the conference like?  It went fine except for the government's stationing of tens of thousands of rifle-toting paramilitaries all around Amritsar, and especially outside the Golden Temple.  All the pilgrims were liable to be frisked and put through metal detectors.  No once could say why.  No one dared ask.  Surely no devotee would want to smuggle a bomb inside to blow up the temple!

The damage had already been done by the Indian army in 1984!  The sacred Akal Takhat Sahib was still being restored some eleven years after the government attack.  The entire Golden Temple complex was ringed by a wide perimeter of rubble and devastation.  A charred bus remained outside, offering poignant testimonial to the legacy of killing and devastation.

Everyone could see that harassment of the peaceful, law-abiding citizens and foreign guests was just another ploy on the part of the insecure government, hoping to impress, intimidate and suppress the sovereign power of the Sikhs. 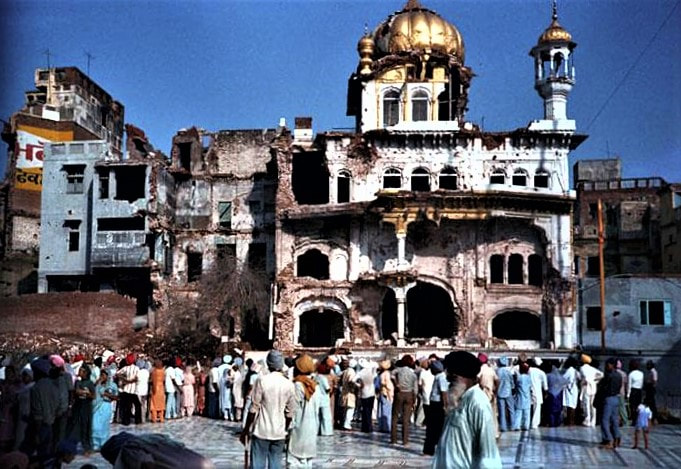