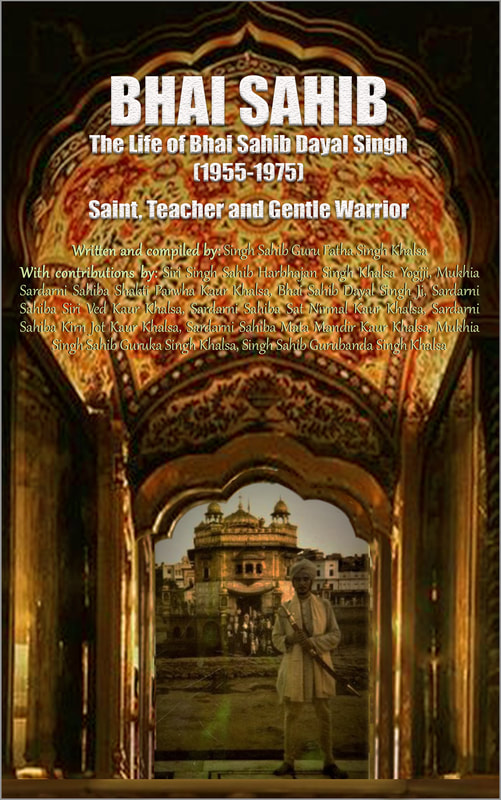 When an Indian yoga teacher came to give a class at his Los Angeles high school in 1970, Dale Sklar recognized at once a calling from out of the ordinary.   He quickly attached himself as a devoted student to Yogi Bhajan and the fledgling American Sikh community a few miles' bike ride from his home.   For his sheer focus, love and devotion to his new path, Dale was recognized as "Bhai Sahib" - a religious title meaning honoured brother - "Dayal Singh" - a spiritual name meaning lion of compassion, before his 18th birthday.   Towering above fellow Sikhs ten and twenty years his senior, Bhai Sahib lived an exemplary life of service and good humour until his passing a car crash - on the way to India - at the age of 19.   This is his story told in the words of people who knew, loved and respected Dayal Singh, and in nearly 100 photos of his brief life as a Sikh in America and India in the early 1970s.

"It's just beautiful!  Thank you for all of this effort.  I have you 5* on Amazon.  :)"   Sat Nirmal Kaur Khalsa, Espanola, New Mexico 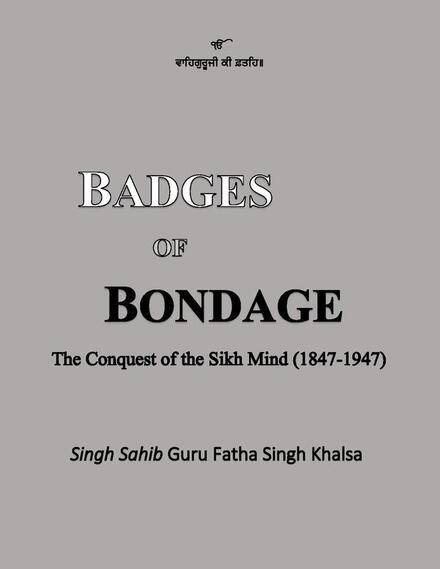 In 1846 C.E., when they had defeated the Sikh nation of Punjab, the officers of the British East India company found themselves in charge of a vast tract of land inhabited by a proud people with a history of surviving political and religious oppression. The Khalsa Sikhs, the order of "saint-soldiers" founded by Guru Gobind Singh in 1699 had weathered Mughal oppression and rebounded from two ghallugharas, or "holocausts" (1746 and 1762). When the Sikh confederacy was joined together by Maharaja Ranjeet Singh in 1801, it governed a domain the size of France. The Punjab was the last part of the Indian subcontinent to fall to the British, and two short years later, the Khalsa would rise again for a second Anglo-Sikh war (1848-49) before settling in, mostly, as loyal vassals of the British Crown.

Badges of Bondage is an account of how the British managed to rule their Punjabi Sikh subjects for one hundred years. It is a story of their stratagems to diminish the beliefs and practices of their subjects, while presenting their own doctrines of government, education and justice, together with their race, culture and religion, as inherently superior. It is an historic account of self-assured agents of a Western power encountering a culture and people unlike any they had known: the Sikhs with their legendary thirst for fairness and their unmatched resilience in the face of adversity.

This book, first published in 1996 and now updated and illustrated with historic photos and paintings, is a story of the successes and failures of the British to cow the Sikhs into subservience. It is also the account of a spiritual nation that at times stood as one against schemes and strategies employed by their rulers and their stooges to prolong British dominance of the people of south Asia, by far the richest and most important part of their global empire.

Finally, this book is a preliminary assessment of long term effects, past India's proclamation of independence in 1947, of British rule on the habits, psyche and self-concept of Sikhs living today.

"Your essay makes very cogent reading and I enjoyed going through it. Your narration is powerful and effective."   Professor Harbans Singh, The Encyclopedia of Sikhism, Punjabi University

"Thoughtful people everywhere will be touched by Guru Fatha Singh's concern, as also benefit from a reading of his first book. His first set of documented writings, succinct and neatly produced, explore the Sikh faith through history. His loyalty to the Guru's purpose is firm as a rock. His understanding of Gurbani is extraordinarily perceptive, and their rendering into English sensitively poetic. His objective in compiling the historic panorama is to re-awaken the true spirit of Khalsa."   Sardar Saran Singh, editor, The Sikh Review, Kolkata

"The author rightly laments the surrender of the rich spiritual heritage of Sikhism to the so-called secular, materialistic and dehumanizing values of the West planted during British rule."   Sardar Gurcharan Singh, Abstracts of Sikh Studies, Chandigarh

“I am writing on behalf of the Siri Singh Sahib. The Siri Singh Sahib really enjoyed reading your book and was appreciative of the work that you have put in. You seem to have done considerable research which is well-documented. I also found your writing style comfortable to read, and it held my interest throughout. I felt your approach is sound, for while it does not actually point fingers and place blame, it makes clear that Sikhs themselves are accountable and responsible for their circumstances.”   Singh Sahib Gurutej Singh Khalsa, Founder, Akal Security 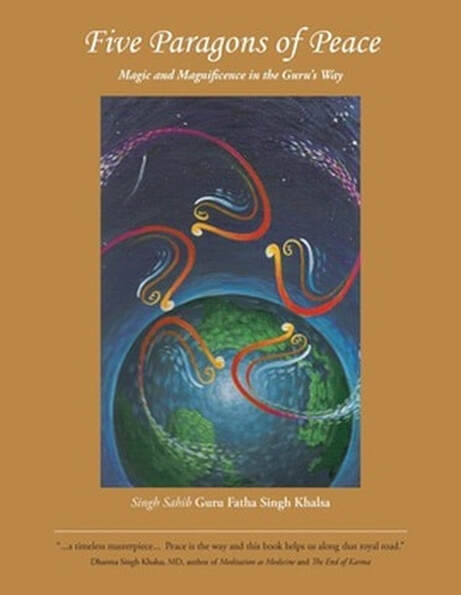 Five Paragons of Peace is an enthralling, multi-disciplinary look at our dawning age of unprecedented change, connectivity and empowerment, full of inspiring stories, mind-boggling science, and featuring accounts of the greatest visionary pioneers of recent times.  The book casts a special light on the contributions of the Sikh tradition and of Yogi Bhajan in particular.

"In Five Paragons of Peace, Guru Fatha Singh has written a timeless masterpiece on the integration of the ancient wisdom of Guru Nanak and the evolution of humanity today.  It is a must read for anyone interested in becoming knowledgeable, elevated and enlightened.  Peace is the way and this book helps us along that royal road.  Highly recommended!"    Dharma Singh Khalsa, MD, author of Meditation as Medicine

"I have enjoyed reading your book - and admire your range of reading, arguments and presentation.  Your treatment of the subject is very original, thought-provoking and refreshing.  It brings into sharp focus the relevance of Sikh spirituality for the modern world."    Balwant Singh Dhillon, head of Guru Nanak Studies Department, Guru Nanak Dev University, Amritsar

"In this fascinating book, Guru Fatha Singh leads us through the evolution we have been going through for centuries - from the days when our consciousness was shaped in a way that has contributed to tragic amounts and forms of violence to our present searching for new paradigms supporting respect for one another and peaceful ways of meeting needs.  Incorporated in the book is a brief, intriguing history of the Sikh tradition initiated by Guru Nanak."    Marshall Rosenberg, founder and education director of the Center for Nonviolent Communication

"I took my time reading your magnum opus.  Wow!  What a chronicle of the emergence of the Aquarian Age.  Good job.  I was amused, entertained, and thoroughly enjoyed the ride.  Thank you."    Guruka Singh Khalsa, founder and executive director of Sikhnet 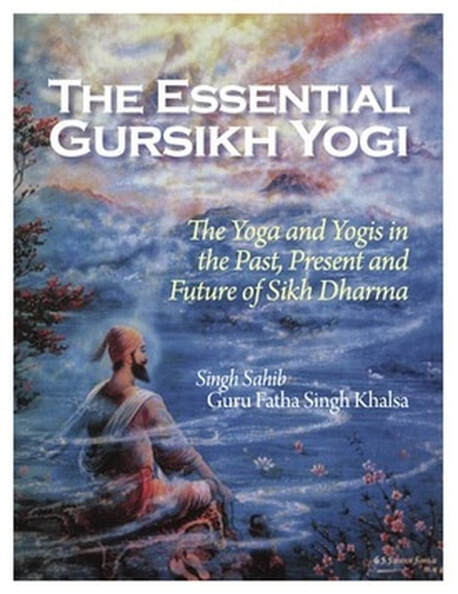 The Essential Gursikh Yogi is a comprehensive resource and guide to the vast, common ground shared by Sikh Dharma practice and Kundalini Yoga as taught by Yogi Bhajan.   It includes dozens of stories of the Sikh Guru's interactions with yogis in Sikh history, hundreds of quotes from Gurbani (Sikh sacred writings) on yogis and the experience of yoga, historical and other evidence of yoga in Sikh practice, the life stories of eight Sikh sadhus, nearly 80 quotations of Yogi Bhajan on this and related subjects, and four kriyas taught by Yogi Bhajan.  This book is approved by the Kundalini Research Institute in New Mexico which exists to safeguard the purity of the teachings of Yogi Bhajan.

"It is wonderful!  Shabash, Veerji!"   Shanti Kaur Khalsa, author of The History of Sikh Dharma of the Western Hemisphere 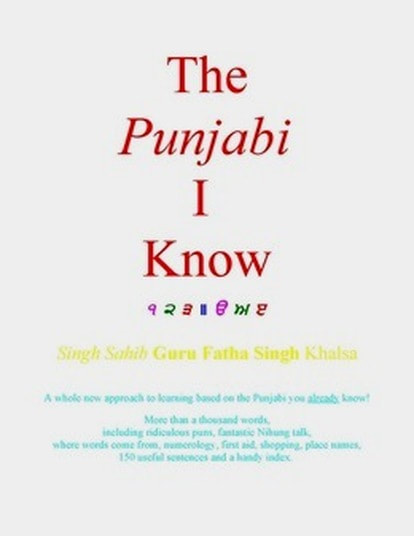 The Punjabi I Know is a fun, easy-to-read Punjabi primer perfect for English speakers who don't have a clue about Indian languages.

At its simplest, The Punjabi I Know shows how to write common words like "guru" and "sitar" and "Amritsar" in the Punjabi script.  At its best, it makes all kinds of connections between words you already know that are currently used in Punjabi and you didn't even know.  There are words like "cell phone" and "pump" that have been adopted in the East, and others like "jungle" and "thug" that we have taken up over here, and there are hundreds of them.

This book is also spiced with crazy Indian synonyms, words you'll think you know, but you don't, words like: "barf" (which actually means snow or ice) and "Billy" (which means a cat).  There there funny words from the marijuana-crazed Nihangs, like "samundar," which means ocean, but really is just an amount of milk and "ukuldaan," a giver of wisdom, in this case a club or a mace.

The newest edition of The Punjabi I Know has a very practical sense.  Aside from numbers and days of the week, it includes simple sentences for: 1) shopping, 2) travelling, 3) teaching a yoga class, 4) visiting a Gurdwara, and 5) going to a hospital.  Indispensable for your next trip to India or your local Indian grocery store or temple.